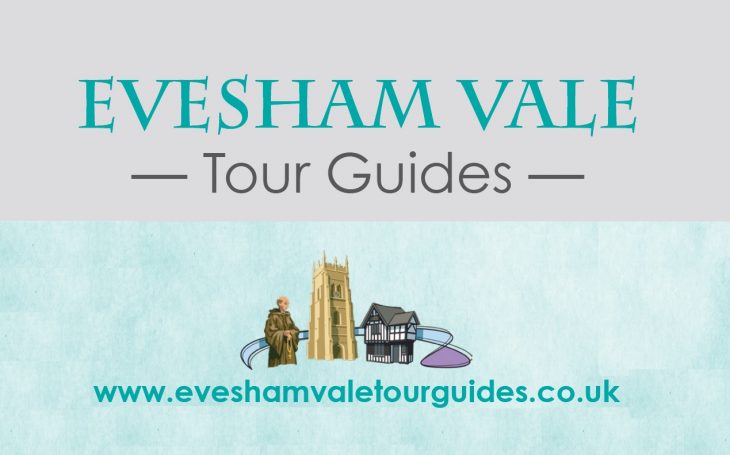 The Evesham Vale Tour Guides’ are a well established group of professional and enthusiastic people who are waiting to show you around the beautiful Vale of Evesham.

The Vale of Evesham is watered by the River Avon and bounded by the Cotswold’s, Bredon and The Malvern’s, has for centuries supported communities which have thrived on its fertile soil – renowned for being the centre of the fruit and market gardening industry; Evesham and the surrounding Vale has gained the enviable reputation of being known as ‘The garden of England’ To help you enjoy and share that quality, the Evesham Vale Tour Guides can offer a plethora od special interest tours: on foot, by coach pr even by boat.

How It All Started:

Twenty years ago an enthusiastic group of people completed a “Guiding” course at the local College and eventually became recognised Green Badge Guides by the Heart of England Tourist Board. These dedicated volunteers devised walking tours of Evesham and these proved so popular that they were soon taking place several times a week.

Unfortunately over the coming years, the number of guides diminished – leaving only two who worked valiantly to keep the interest in Evesham alive. In 2006 new volunteers were thankfully recruited and their enthusiasm and organisation meant that the Tour Guides popularity increased, which inevitably widened their horizons from just the Town to the Vale of Evesham.

During the past two years the Evesham Vale Tour Guides have gone from strength to strength and they are now an invaluable asset to the historic town of Evesham and its horticultural Vale. What better way to learn about an area than to have a trained tour guide (who is also a local resident) show you all the highlights and tell you a little of the history.